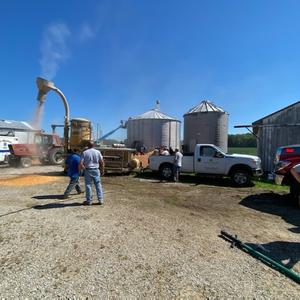 NEW WASHINGTON, OH - First responders raced to save two individuals trapped inside a grain bin on Marsh Road just outside of New Washington in Crawford County. Harlan Martin, 65, was life-flighted from the scene by MedFlight after being trapped in the grain bin filled with corn for several hours. It is unknown the extent of his injuries and how he got stuck in the first place.

Around 9:48 a.m., the Crawford County Sheriff's Office received a call regarding two individuals trapped in a grain bin at 7835 Marsh Road with several agencies called for mutual aid to the scene.

The first responders used several different grain removal tactics including cutting holes in the sides of the bin and grain vacuums to help in the rescue effort. Lois Martin, 61, Harlan's wife was removed shortly after the first responders arrived, but Harlan would take over three hours to be removed.

Nov 01,2022
DELAWARE, Ohio – Heritage Cooperative is excited to announce the development of 25 acres of its Marysville Ag Campus location into demonstration plots to showcase on-farm conservation solutions for Central Ohio producers. Marysville Ag Campus is located at 15090 Scottslawn Rd., Marysville, Ohio.
Oct 13,2022
The 4R Nutrient Stewardship Certification Program has announced that Heritage Cooperative’s Kenton facility has been added to its growing list of nutrient service providers to achieve certified status.
Aug 02,2022
As farmers deliver their harvested crops to market, more of them are choosing to donate a portion of their commodities to support the Ohio Farm Bureau Foundation through the Gift of Grain program.