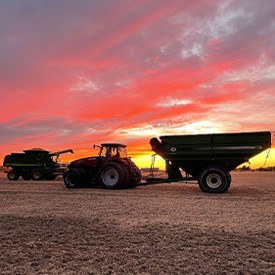 Ed Nienaber
Vice President, Grain Division
Welcome to 2023 and the first week of new year trading finds most if not all commodity markets struggling to find support. Cash movement of grain has put pressure on nearby basis and the grain futures market is attempting to determine just how bad Argentina’s bean production will be hurt by drought conditions. With all the movement in bean prices the past two weeks, we currently are trading unchanged at the noon hour on Friday. Corn, however, is trading down twenty-five cents for the week as buying seems to have dried up in anticipation of the USDA upcoming crop report. We will be getting fresh stocks in all position numbers as well as final 2022 crop production numbers on this coming Thursday. This is annually one of the most active traded reports with history of limit moves. It will tell us not only what final production numbers are for each state, but also where those bushels are physically located. The market will then set its focus on Southern Hemisphere crop production and US prospective planting for the upcoming crop year. Please continue to be safe and have a great week.

Wes Bahan
Director of Grain Purchasing
Good afternoon. It’s been a couple of weeks since our last commentary. I hope everyone had a great holiday season. Santa dropped off a nice Christmas gift as corn and bean prices rallied going into the last week of the year. Unfortunately, much of that has been taken back since the beginning of this week. The lack of market participation during the holiday season is always a factor and this year was no exception. As a matter of fact, we have struggled for much of the year to find market participation, and currently open interest at the lowest point since 2013. Market participation for soybeans is better, but it is at levels not seen since 2015. Not only are we seeing lack of participation in the futures markets, but we are also not seeing very good demand in the export market either. The export sales report from this morning had corn missing the mark on expectations once again. We are now 14% below pace needed to hit the USDA’s projection, which is doable, but we must get competitive with Argentina in the March-April-May timeframe. This morning’s report for soybeans had demand right at the midpoint of expectations. As we approach the Feb-March timeframe we will see demand shift to Brazil as they are much cheaper and have a slight freight advantage over us. We will have our final 2022 production numbers released by the USDA on January 12th, and we will also get a look at Q1 grain usage. These reports are typically market movers and I would expect the same this year.

Lou Baughman
Grain Merchandiser, Kenton (Region 1)
Happy New Year! We came back to hitting the markets hard, but today we are trying to recover some of those losses. Argentina had rain in the forecast for next week, but today the forecast is turning drier, so we will see if today’s gain in beans will hold to the close. There were decent bean sales last week, but corn and wheat sales are still struggling. Midday markets have corn and wheat slipping with wheat down .02 and corn down a half cent. Next Thursday will be a big report day, with analysis and lots of changes anticipated.

Haylee VanScoy
Grain Merchandiser, Upper Sandusky (Region 2)
Hope you all had a wonderful Christmas and New Year! As the holiday chaos has come to a close, the grain markets have followed suit this week. Between rain in Argentina, Brazil harvest underway, lacking exports, and the rise of the US dollar, the grain market saw significant losses the last few days before rebounding today. March 23 beans have recovered yesterday’s losses and are back above the 20-day moving average, knocking on the door of $15.00 again. March 23 corn saw a similar pattern this week and are sitting around its 20-day moving average of $6.56. Next week, we’ll be keeping an eye on the USDA’s release of their final 2022 crop production numbers and the December Quarterly Grain Stocks on January 12th. Also, next week we will have a new face to introduce in the Upper Sandusky office. We have hired a new regional grain merchandiser for Region 2 to take over my old role, as I have transitioned into my new role as the Director of Grain Purchasing over the last 5 months. He will be a great asset to the Upper Sandusky team, and we’re excited to have him onboard. I hope you all give him a warm welcome. Thank you for another great year and looking forward to a great 2023! It was a pleasure to work with you all in the Upper Sandusky region and don’t worry, I’ll still be up there from time to time and/or only a phone call away!

Lisa Warne
Grain Origination, Mechanicsburg (Region 3)
Happy New Year! In the three weeks since we last wrote, the grain market has traded both sides, but surprisingly at midmorning today corn, beans, and wheat are all within a couple pennies of where it closed on 12/16/22. On the final trading day of 2022, March corn futures hit an 8-week high while March soybean futures hit a 6 ½-month high. Unfortunately, the bears brought the market down earlier in the week, but it’s looking promising to close the week in the green.

Better than expected rains in drought-stricken Argentina over the weekend with an extended forecast looking more normal, along with a stronger US Dollar aided in the steep losses this week. Low export demand is also concerning, possibly throwing the balance sheets into uncertainty. The market is now looking at what to expect from a large amount of data being released next week in the USDA’s Crop Production Report, World Supply & Demand Estimates, and Quarterly Stocks Report all due out at noon on Thursday. Consider your pricing goals and let us know if you’d like to put a target offer in place. There could potentially be quick changes in the market as all the information is digested. Have a great weekend!

Ralph Wince
Grain Merchandiser, Canfield (Region 5)
Good afternoon and happy new year to everyone. The grain markets have started the new year with some correction and profit taking. As we rolled to the end of 2022, we saw the markets finish with a nice rally on very little news. As traders rolled into the start of 2023 on Tuesday there was really no news to keep them bullish and that is why I believe we saw that correction the last few days. As I write this, we are seeing beans bounce back some while corn and wheat are steady.

On Thursday next week, we get the first major report of the 2023 marketing year with the final production numbers for the 2022 harvest. My take is that we may see a slight uptick in ending stocks, but I don’t think that it will be anything drastic. But this report is sometimes known for its surprises. As far as other outside factors affecting the markets, one thing on my radar that hasn’t received a lot of media attention lately continues to be the war in Ukraine. There are some things there that could have impact on the markets.

As far as selling what you have unpriced, give us a call, let’s talk about your situation and come up with a plan. Have a wonderful weekend.