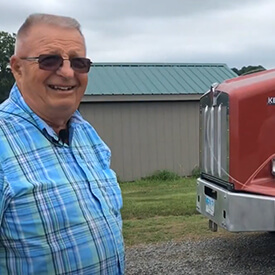 Spanning nearly 2,300 acres across two states and five counties, Myron Wehr Farms is a unique operation. Heritage Cooperative grower, Myron Wehr, raises corn, soybeans, wheat, and barley in eastern Ohio and western Pennsylvania with the help of his neighbor. Myron says he has been farming since he was born, and over the past 80 years, a lot has changed on his operation.

“I’ve seen a lot of changes in the way we farm in my lifetime,” said Myron. “We’ve always tried to look at new things to see how they could benefit our operation, whether that be new agronomic practices, seed, or equipment.”

Myron grew up on his family’s dairy farm in eastern Ohio and learned the importance of sustainability from a young age. To Myron, sustainability not only means conserving resources for the next generation, but it also means staying in business today. “I’ve tried to do things that would keep me in business over a long period of time,” said Myron.

After barley harvest in late-June, Myron bales the straw and then plants soybeans into the barley stubble. “These are my most profitable acres,” said Myron. Double-cropping soybeans provides a win-win for both the land and the farm’s bottom line.

“On the acres where we double-crop and plant cover crops, we have something living and growing in the ground nearly 12 months out of the year, and that’s sustainable for the soil, helping us maintain the land for the next generation,” said Myron.

Myron plants cover crops on some of his most erosion-prone and hilly ground. “Cover crops have worked very well as it has greatly reduced erosion and allows organic matter to be added to the top layer,” said Myron.

In addition to cover crops, no-till is another practice the farm uses to improve soil structure to minimize erosion. With nearly 40 years of no-till experience, Myron has learned a lot about how the cropping system works with his rotation.

“No-till has helped keep the organic matter in the top layers of the soil and it has also reduced erosion,” said Myron. “Another practice that we have implemented is subsoiling. We fracture the ground every 30 inches, 12-14 inches deep to break up hardpan below the topsoil which increases water infiltration and nutrient uptake for the crops.”

“These practices have helped maintain and increase yields on our acres,” Myron explained. “Grid soil sampling allows me to track the good and bad areas of each field and VRT has allowed us to increase yields on the poor areas and reduce the amount of inputs we use on the good areas.”

Not only has Myron been to make the most of what he has in regard to land, but he has also been able to do the same when it comes to equipment. “My corn planter is 11 years old,” said Myron. “Instead of buying a whole new planter, we’ve been able to make updates to an older planter and it’s doing an excellent job.”

Some of the updates he has added to the planter include Precision Planting seed meters and electric drives to help with seed placement. More recently, he added VApply HD for a more controlled nitrogen application. “Precision tools have been an advantage,” added Myron.

Managing the farm’s environmental impact as well as protecting the profitability of the operation has always been essential to the Wehr’s. Myron credits his father for being progressive and open-minded to new practices, as this has greatly influenced his commitment to sustainability which will continue to pay off for years to come.

NEW WASHINGTON, OH - First responders raced to save two individuals trapped inside a grain bin on Marsh Road just outside of New Washington in Crawford County. Harlan Martin, 65, was life-flighted from the scene by MedFlight after being trapped in the grain bin filled with corn for several hours. It is unknown the extent of his injuries and how he got stuck in the first place.