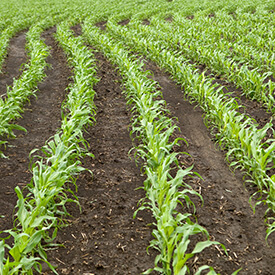 Lou Baughman
Grain Merchandiser, Kenton (Region 1)
Weather fear put a bounce in the market this week. Forecasts are calling for excessive heat in the next six to ten days but watch for updated weather Sunday night…if the heat lessens, the market will pull back. There is also the Inflation Reduction Act the government is trying to implement. This is adding support to the markets today. If passed, this could put 500 million dollars into the biofuel infrastructure product market expansion.

Haylee VanScoy
Grain Merchandiser, Upper Sandusky (Region 2)
Grain markets made a recovery this week, as hot and dry weather continues to creep back into the forecast for the coming weeks. The EU is also experiencing warmer temps, further leading to concerns with their wheat and corn crops. There’s not a lot of room for error, as concerns with yield loss could lead to significant impacts on carryout numbers. Stay tuned for next week’s private yield surveys to start coming out.

Corn and beans saw lower than expected drops on their good/excellent ratings in this past Monday’s crop conditions to start the week, and then beans proceeded to lead the rally with the help of stronger crude oil and global veg oil markets. Wheat has backed off slightly today with the wrap up of the Wheat Quality Council’s spring wheat tour in North Dakota and Minnesota. The average yield came in at 49.1 bpa, which is the highest we’ve seen since 2015.

In terms of world news, skepticism has grown regarding last Friday’s agreement to allow a safe corridor for Ukrainian exports. Russia lacks commitment as they’ve continued to bomb ports. Tensions are rising between China and the US as President Biden’s call with the Chinese president appears to not have been as productive as hoped yesterday and China remains insistent on the reunification of Taiwan.

On Wednesday, the Fed announced their expected 75 basis pt rate hike this past Wednesday. We also saw a second consecutive quarter of negative GDP, which by definition indicates that we are in a recession now.

Corn basis continues to hold its strength this past week, however beans have been on a steady decline as processor bids have backed off significantly the last 2 weeks. If you still have old crop to price, I highly recommend taking advantage of this late summer rally and having targets in. Old crop corn was just shy of $7 on its highs today and beans over $15.50. I would anticipate the first time we see a shift in the forecast for rain or cooler temps, we’ll see a sizable selloff again. As for new crop, continue evaluating where you’re at on your percent sold and determine whether you need to be adding to your sales. New crop corn approached $6 today and beans were over $14.30 for Upper Sandusky. Don’t hesitate to reach out if you have any questions. Hope you all have a great weekend!

Lisa Warne
Grain Origination, Mechanicsburg (Region 3)
What a rally we have seen this week! With twenty minutes before the market close, it seems traders are beginning to take some end-of-month profits as wheat has turned negative, corn trading both sides of unchanged, and while soybeans are still positive, they are well off their session highs. For the week though, corn and wheat are up roughly 50 cents from last Friday and soybean futures are up about $1.40 a bushel. Extremely hot and dry forecasts for the next few weeks in the Western Corn Belt are putting yield potential at risk, especially for soybeans. Crop condition ratings also declined more than expected on Monday’s report. Extended weather forecasts released over the weekend will determine how the market session opens Sunday night. Have a great weekend!

Steve Bricher
Grain Operation Manager, Urbana (Region 3)
Another week is in the books. County fair season is in full swing. The grain markets are doing their best to find support and a reason to work higher.

Since we closed last Friday, we are over 70 cents higher on December corn and over $1.30 higher on November soybeans. Why the rally? We have not yet seen any bushels get shipped out of the port in Ukraine. The weather forecast for the next couple of weeks, if it comes to fruition, is not going to be good for the crops. We cannot afford a large reduction in this crop as carryouts for 2023 were already tight. If you have been getting rain and your crops look good, you are welcoming the rally, not so much if you are drying out.

Old crop basis, especially on soybeans, has been working lower. As I wrote a couple of weeks ago, the processors only need to buy enough beans to get themselves to harvest and with a $1.30 inversion they don’t want a lot of expensive beans sitting in the bins when harvest starts.  Old crop corn basis seems to be holding for now but the same thing will be true for that as we move forward.

You will need to keep an eye on the weather forecast over the next couple of weeks. If the weather forecasters are correct and we turn hot and dry across the Midwest, it may give you a chance to make new sales at much better price levels than you were seeing just a few weeks ago.