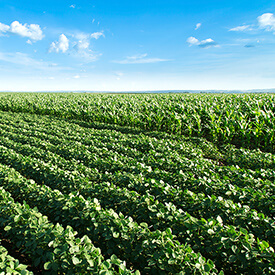 Wes Bahan
Director of Grain Purchasing
Good afternoon and welcome to Friday once again. The weekly crop condition report had Ohio corn getting better by one percentage point from the prior week. I still cannot believe that we have not shown any signs of improvement on these weekly reports, I guess my travels have not taken me to the bad spots. We are still 24 points behind last year, so there must be a rough spot out there somewhere. Soybean conditions stayed on par from the week before, and this again is surprising to me. This puts our bean crop at 19 points behind last year. The meltdown of cash bean basis seemed to slow this week, and levels have found some stability for now. Corn basis the last few weeks has been working its way slowly higher, and evidently, there has been some movement causing the basis to level off. Once again, we must look at old crop ownership. The cash bids will at some point converge with new crop bids, and right now those bids are almost a full dollar lower than current cash bids.
Haylee VanScoy
Grain Merchandiser, Upper Sandusky (Region 2)
It has been a roller-coaster week in the grain markets, with ever-changing weather forecasts and geo-political tensions between China, Taiwan, and the US. Despite China’s warning to Taiwan and the US, Nancy Pelosi proceeded with her trip to Taiwan earlier this week. As a result, China made their presence known by conducting military exercises surrounding Taiwan upon Pelosi’s arrival and is expected to continue through Sunday. China also announced that they would place sanctions on trade with Taiwan and suspend talks with the US regarding climate and military matters. This has led to some concern on future long-term export demand with China, despite them purchasing 132,000 MT of new crop beans this morning. In other world news, 3 more ships are preparing to leave Ukrainian ports after the first ship successfully navigated the black sea this week. Although the first shipments have been corn, this has still resulted in resistance to the wheat complex this week.
Considerable crop stress continues in many areas of the western US. However, the central and eastern corn belts have helped to offset that potential loss to date. Weather over the next two weeks is going to set the tone moving forward into harvest. There’s a chance of scattered showers over the weekend, so we’ll see if that comes to fruition within much-needed areas and how that will affect the trade come Sunday night’s opening market. I would suggest having your $14 bean and $6 corn offers in if you need to increase your new crop sales, in case the rain chances subside, and/or the heat turns back up.
Reminder that next Wednesday is the July CPI report with the August WASDE on deck for Friday the 12th. In addition, don’t forget that DP corn and beans must be priced by August 31st, or they will be subject to new rates. Touch base with your merchandisers to evaluate where you’re at with old crop and new crop, as harvest will be here before we know it. Hope you all have a wonderful weekend!

Lisa Warne
Grain Merchandiser, Mechanicsburg (Region 3)
Last week’s weather rally was short-lived as we saw steep declines on Monday and Tuesday. Wednesday was mixed with corn up and soybeans still down. Thursday finally saw some decent recovery in all commodities, but we are closing out the week with another mixed day today.
One reason for the market plunge at the beginning of the week was the departure of the first export ship out of Odessa, Ukraine since the war began on February 24th. Three additional ships of corn left the port just today. Better than expected crop condition ratings on Monday continued the market regression on Tuesday. Good/Excellent ratings were steady-to-higher across the country. Ohio’s corn improved a point while soybeans remained the same.
StoneX came out with their initial yield estimates, which were slightly under the USDA’s spring figures. They have U.S. corn at 176 and soybeans at 51.3, compared to USDA’s 177 and 51.5, respectively. StoneX has Ohio corn at 178 and soybeans at 55. USDA will release initial state estimates on their report next Friday, August 12th, at noon. Expect continued market volatility until we see more confident yield projections as the season progresses.
I’d like to extend good luck to all the families showing at the Champaign County fair starting today and running through next week. Have a great time!

Steve Bricher
Grain Operation Manager, Urbana (Region 3)
The calendar has now turned to August. I watched a preseason football game last night, and kids are getting ready to go back to school.

If you have been reading the newsletter since we started it, you know I ride a motorcycle. I enjoy getting out and seeing the state. My wife and I, and a friend, did over 700 miles around eastern Ohio last weekend. I should turn the mileage in for work since my wife says all I do is look left and right at crops as I ride!

The crops look consistent in the eastern Ohio area. They did not look like they were lacking moisture, but they did seem behind from what I saw last year. I was surprised that I smelled corn pollen between Dover and Sugarcreek. That corn is going to need a late frost.

This week, the market reacted to less heat and some rain early in the week as we lost everything we gained the previous week. Thursday, the markets saw a recovery of some of the early week losses, but we are still down for the week. The market swings seem wild, but the trade activity has been light which causes the markets to get pulled one way or the other to larger extremes than maybe it should.

Over the next few weeks, we will start getting reports from people and companies out doing crop surveys, so we will get some confirmation of what we think we have in the fields. I have told everyone that all summer long in my travels the best crops I have seen around Ohio are in my backyard, and that is still the case today.
Ralph Wince
Grain Merchandiser, Canfield (Region 5)
Good afternoon. This week brought out the first of the private estimates that will begin over the next couple of months as to what the size of the crop will be this fall. Stone X surveyed all of its customers and came up with a national yield of 176 bu per acre on corn and 51.3 bu per acre on soybeans. Their estimate for our state came in at 178 bu per acre on corn and 55 bu per acre on soybeans.

We all know that August is the critical month for beans. So it will be a sit and wait what the weather does. Outside of the weather today there does not seem to be a lot on the fundamental side to talk about. I believe that is part of the reason that the markets are struggling to find any support. Outside markets continue to have a negative pull on the grains right now. Recession fears continue to weigh on the markets as well. A strong dollar and lack of new export sales have also worked against the grains.

This week saw the first ship of grain leave Ukraine via the way of the Black Sea. Dozens of ships remain trapped at the ports in Ukraine, dating back to February when the war first started. It is rumored that those ships will start leaving soon.

Lastly, I want to touch on the weather front here in NE Ohio. We did receive some rain yesterday (Thursday). The amounts did vary from .3 tenths to .8 tenths from those I have talked to. We still are on tap to continue to receive some rain over the next 2 days. Have a great weekend.